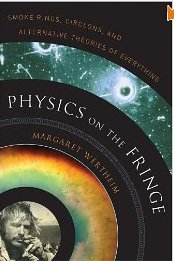 Physics on the Fringe: Smoke Rings, Circlons, and Alternative Theories of Everything (Buy Now)

Margaret Wertheim
For the past fifteen years, acclaimed science writer Margaret Wertheim has been collecting the works of \"outsider physicists,\" many without formal training and all convinced that they have found true alternative theories of the universe. Jim Carter, the Einstein of outsiders, has developed his own complete theory of matter and energy and gravity that he demonstrates with experiments in his backyard?-with garbage cans and a disco fog machine he makes smoke rings to test his ideas about atoms. Captivated by the imaginative power of his theories and his resolutely DIY attitude, Wertheim has been following Carter\'s progress for the past decade.