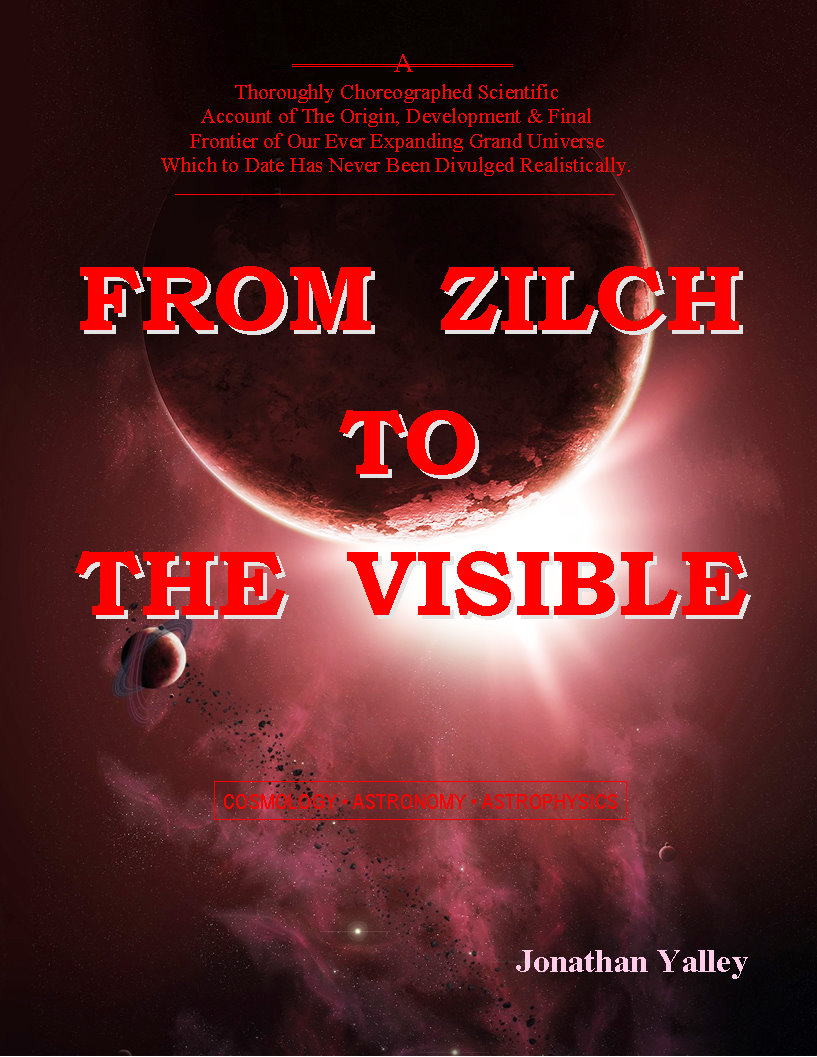 From Zilch to the Visible: A Thoroughly Choreographed Scientific Account of The Origin, Development & Final Frontier of Our Ever Expanding Grand Universe Divulged Realistically

Jonathan Yalley
This book engages cosmology, astronomy and astrophysics in concert with the grand universe. It involves a technically choreographed scientific account of the origin, development and final frontier of an ever expanding grand universe which hitherto never before realistically divulged.

Realistic and logical scientific explanations are given to not-so-easy-to-understand cosmological issues like: how the grand universe began altogether; how long it took for its manifestation; whether there existed a Big Bang at all and if it did exist whether it resulted from a singularity consisting of matter with infinite density and near zero volume or it resulted from a plurality; the elusive nature of the period before the opaque time curtain after the so-called Big Bang as set forth by the general theory of relativity; the crucial bonding and accelerating roles of respective dark matter and dark energy; the concepts of black hole, white hole, worm hole and time travel from cosmological viewpoint; the question of multiple universes and of course the crucial importance of the irresistible question on the age of the grand universe among many others. One of the most captivating aspects of the physical universe is its workings as an ideal complex gaseous machine with the ability to perpetuate itself by the birth and death of stars. Influencing the following: high velocity moving gas in interstellar medium (ISM), cosmic voids which are the sources of empty space in star formation areas, WMAP cold spot in relation to parallel universes, the missing link existing between globular clusters and dwarf galaxies, blue straggler stars (BSS) and small galaxies giving birth to smaller stars among others, the physical universe showcases four unique gaseous sub-machines.

With a three-way approach unleashed to practically determine the same age of the grand universe, science amicably confronts religion. Eventually, erroneous zones fizzled out leaving not only realistic answers but also the very much needed truth about the grand universe\'s true age. Also, a fundamentally versatile rule dubbed the General Constant Spin Principle through its consistent regulatory functions helped to demonstrate the simplistic nature of the overall physical transformation of the grand universe. Such physical transformation involves two physical phase transition namely the primary and secondary physical universe respectively initiated during its origination and early development. These will ultimately be crowned with a tertiary physical phase as its terminal final frontier. In the very end, the grand universe emerges as an ever-expanding crystal ball of galaxies in which we live.

-  Origin of the Primary Physical Universe.

-  Development of the Secondary Physical Universe.

-  A Delayed Explosion of the Grand Universe.

Triplicate Ages of the Grand Universe

The Universe As A Perfect Gaseous Machine

and many other subtle cosmological issues which together are succinctly and realistically confronted in this book, From Zilch To The Visible.