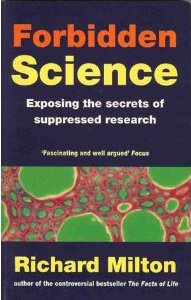 Richard Milton
There is no doubt some areas of research are to some degree taboo, I mean, not even looked at because it is considered too far from the mainstream or too \"way out\" in the sense of UFO cults or seances. Any \"self-respecting\" scientist would not dare to discuss such things seriously with other scientists or in public. What do I include in such \"pseudo-science\" ? Well we don\'t even have to leave the mainstream to do so, the research carried out by Jacques Benveniste comes to mind, a thoroughly and deeply investigated area on the possibility of water carrying some sort of memory, not only has this been shown to have theoretical support apart from the conclusive experimental evidence but it has simply been taken as the work of a charlatan or cheat because it could not possibly be \"right\", as another example, a scientist whose name I won\'t use to ensure his privacy, has developed a theory in physics which is not considered because it is not following the approaches of other scientists and so must be wrong. Science and also mathematics is full of this sort of negative, and lets put a fine point on it, unscientific opinions. In other words these rejections of the new are just that a rejection of anything new which either may show the reviewer\'s own work may be faulty, out of date or his group is no longer safe and secure, whether this means job security or just the security related to the self image. Is this scientific ? Unfortunately the academic comunity is still full of power play and little empires no matter how trivial just so the egos are boosted and they are safe in their little world. Am I being too harsh ? Well it may be so but I have experienced enough of this sort of thing to say that at times this is true. What happened to the spirit of scientific discovery which, as can be seen from history, continuously has to either battle the status quo or wait until the opposition are dead ? Milton in this timely book talks about these very problems still present in science, in no way does he carry on with dubious arguments which flog their own horses eg Creation Science but rather investigates an area thoroughly and asks some important questions, much as Feyerabend has done in his work although the topic concerns the basis of science rather than any research studied, I think he may have been able to get away with this more than scientists actually working in new areas because it concerns the philosophy of science and as such is comfortably removed from \"the truth\" which is supposed to be represented by orthodox science. So, Milton has produced an essential read for scientists and non-scientists which hopefully will have the courage to support their fellow scientists in such endeavours. - Frank Bierbrauer, amazon