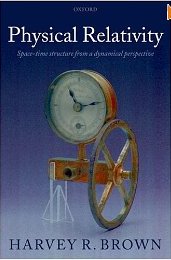 Harvey R. Brown
Physical Relativity explores the nature of the distinction at the heart of Einstein\'s 1905 formulation of his special theory of relativity: that between kinematics and dynamics. Einstein himself became increasingly uncomfortable with this distinction, and with the limitations of what he called the \"principle theory\" approach inspired by the logic of thermodynamics. A handful of physicists and philosophers have over the last century likewise expressed doubts about Einstein\'s treatment of the relativistic behavior of rigid bodies and clocks in motion in the kinematical part of his great paper, and suggested that the dynamical understanding of length contraction and time dilation intimated by the immediate precursors of Einstein is more fundamental. Harvey Brown both examines and extends these arguments (which support a more \"constructive\" approach to relativistic effects in Einstein\'s terminology), after giving a careful analysis of key features of the pre-history of relativity theory. He argues furthermore that the geometrization of the theory by Minkowski in 1908 brought illumination, but not a causal explanation of relativistic effects. Finally, Brown tries to show that the dynamical interpretation of special relativity defended in the book is consistent with the role this theory must play as a limiting case of Einstein\'s 1915 theory of gravity: the general theory of relativity.

Physical Relativity is an original, critical examination of the way Einstein formulated his theory. It also examines in detail certain specific historical and conceptual issues that have long given rise to debate in both special and general relativity theory, such as the conventionality of simultaneity, the principle of general covariance, and the consistency or otherwise of the special theory with quantum mechanics. Harvey Brown\'s new interpretation of relativity theory will interest anyone working on these central topics in modern physics. - Amazon

\"A provocative and challenging book . . . It expertly synthesizes several analyses and generalizations of the Lorentz transformations. The historical sections are rich, concise and absorbing. Moreover, it includes worthwhile appendices on general covariance and on the relation between special relativity and quantum theory. The lively argumentation throughout thoroughly engages developments from decades of works in philosophy of space and time, and it deserves careful attention.\" - Alberto A. Martinez, Studies in History and Philosophy of Modern Physics

\"Inspiring and thought-provoking content . . . an absolute must for physicists and philosophers\" - Mauro Dorato, International Studies in the Philosophy of Science