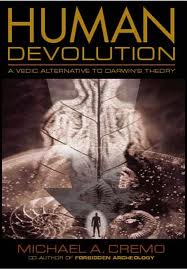 Michael A. Cremo
This sequel to bestseller Forbidden Archeology answers the question: If we did not evolve up from apes, then where did we come from?

The controversial bestseller Forbidden Archeology documented evidence showing that humans have existed on Earth for hundreds of millions of years and catalyzed a global inquiry. We did not evolve from apes, as Darwin theorized, then where did we come from?Human Devolution is Michael A. Cremo?s definitive answer to that question- We did not evolve up from matter; instead we devolved, or came down, from the realm of pure consciousness, spirit. Basing his response on modern science and the world?s great wisdom traditions, including the Vedic philosophy of ancient India, Cremo proposes that before we ask the question, ?Where did human beings come from?? we should first contemplate, ?What is a human being??