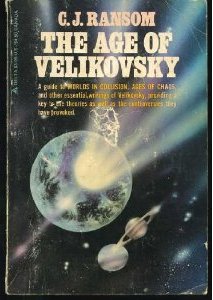 The Age of Velikovsky (Buy Now)

C. J. Ransom
The Age of Velikovsky is written by C.J. Ransom, a PhD in Plasma Physics who conducted research for General Dynamics\' Convair Aerospace Division. It is important reading for anyone interested in the Velikovsky affair. Ransom gives an overview of Velikovsky\'s early life, then Chapter 1 begins with the events surrounding the publication of Velikovsky\'s first book in 1950: \"The reaction to _Worlds in Collision_ by many members of the scientific community can provide research material to interested psychoanalysts for decades.... unscientific and unethical actions did take place, and no amount of rationalization can justify these actions... Many of the actions were personal asaults on Velikovsky, or others who happened to be in the line of fire. These actions were inexcusable even if Velikovsky were wrong...\" Ransom is given to bursts of humor, as can be seen in the following: \"*Before the book was published*, review articles... appeared [which] did not accurately portray the conclusions or the scholarship which led to these conclusions. Unfortunately... [s]ome writers never came closer to the original than a review article, and they wrote articles refuting what *others* thought Velikovsky might have said. Oddly enough, some of these same people claimed that Velikovsky did not use proper sources.\" (emphasis in original). So much pressure was exerted on the publisher by the scientific community that the book was transferred to another publisher, though it had remained the best-seller almost from the first day of its release. This attempt at supression of Velikovsky\'s work can be clearly seen as one of the darkest and shabbiest actions in the history of modern science. The author devotes almost 200 pages to showing many different aspects of Velikovsky\'s discoveries, with evidence that indicates their accuracy. There is the correction of history by over 500 years and the inconsistencies that are eliminated by the revised chronology. There are numerous characteristics of the sun, planets, and moons, realization of which were surprises to scientists, but had either been explicitly predicted by Velikovsky or fit his theory better than they did into existing scientific dogma. Then we read about the AAAS convention of 1974: \"[it] was advertised as a scientific appraisal of Velikovsky\'s theory. But, at the opening of the meeting, the attendees were informed that the subject was not worthy of scientific discussion and the meeting was being held to point this out to any minds which had strayed from the uniformitarian fath. Several of the participants certainly lived up to the claim that they would not discuss the subject scientifically.\" Paramount among these was Carl Sagan. \"His paper contained nothing which furthered scientific debate. However, his paper was presented exceptionally well, and his charisma added to the effectiveness of the presentation. Most of the audience did not know and, because of his captivating delivery, did not care that many of his points were irrelevant, incorrect, or misleading. His entrancingly arrogant delivery exuded the air of a great evangelist who had come to lead the people along the true uniformitarian path... Perhaps Sagan\'s most quoted statement from the sumposium was this: `My conclusion will be that where V is original, he is very likely wrong; and that where he is right, the idea has been pre-empted by earlier workers.\' Whether this lie was original with Sagan or was fabricated by an earlier worker, it is flatly untrue.\" In Ransom\'s conclusion he says, \"We have seen that a number of irrational acts have occurred in the Velikovsky afffair, and that there are divergent reasons for these actions... However, it is time to look ahead. We could argue forever over what Velikovsky did or did not mean, what he did or did not predict, and miss the total concept he presented. Enough information now exists to show that his ideas are worthy of continued study. Whether he as an individual is right or wrong on some point is irrelevant. Velikovsky\'s work now belongs to the world, and the world will lose by continuing to ignore it.\" Wonderful reading if you can find the book! - Amazon