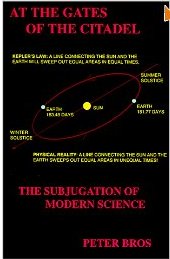 At the Gates of the Citadel: The Subjugation of Modern Science (FBP Copernican Series, V. 1) (Buy Now)

Peter K. Bros
With Kepler\'s Laws of planetary motion, the most mathematical of laws, failing to describe the reality it was designed to describe, where does that leave all of the nonmathematically based laws that underlie modern science, laws which seek to describe reality based on the agreement that they are evident to the sense of all mankind? Does modern science have at its roots a misperception similar to the misconception that put the sun moving around the Earth, a misconception of the universe so basic as to reverse the picture of reality? By assuming movement in the universe to be the result of historical forces, modern science has blinded itself to the measurable fact that matter requires force to remain in motion. As a result, science analyzes the universe with concepts designed to explain what is causing matter to move from trajectories assumed to be the result of historical forces rather than analyzing what is causing the matter to move in the first place. If modern science can create laws that don\'t describe reality and then conform reality to those laws, if it can ignore the forces required to maintain current motion in favor of creating a physical reality that doesn\'t exist, then it must be operating with a defective methodology!At the Gates of the Citadel shows that the scientific method is a tool to create facts rather than a method to analyze physical reality. It describes the mistakes, the misconceptions that have led to the picture of reality modern science paints, a picture that has no basis in physical reality.

Empirical science purports to use procedures which turn concepts into facts. In doing so, it creates unchallengeable laws, laws that were created by men hundreds of years ago before we had any real knowledge of reality, but which now control the reality that empirical science paints a picture of for us. For instance, in an attempt to demonstrate that gravity is proportional to matter, rather than what matter is doing, cooling, Newton created a law that planets will move in straight lines but for the force of gravity, giving rise to the endless search for black holes and dark matter. Thus, our concepts of motion are built the billiard tables of the elite upon which balls remain at rest until something strikes them, and then remain in motion until something stops them. But the balls, sitting motionless on the billiard table, are not motionless. They are traveling around eight hundred miles an hour where I live, moving with the surface of the Earth as the Earth rotates on its axis at about 25,000 miles per hour. They are moving at the rate of 67,000 miles per hour as the Earth orbits the sun, and about 300 miles per hour as the sun falls within the galactic arm. Thus, the existing laws of motion do not adequately explain motion, because empirical science has no physical description of what is holding the balls motionless with respect to the surface of the Earth and no physical description of the forces that make the planets rotate on their axes or orbit the sun, or the sun to drift with the galactic arm of which it is a part. However, knowing that the balls at rest on the surface of the billiard table are not motionless, we can look at the planets orbiting the sun, and assume they are in motion when in fact we know that all objects, no matter where, come to rest with respect to the current forces that are acting upon them, the new law of motion set forth in At the Gates of the Citadel. Even though with respect to one another, the forces with which the planets are at rest with cause the planets to appear to move, knowing that the planets are at rest with respect to the current forces acting upon them leads us to examine reality in a search for what Sir Francis Bacon called the hidden causes of motion, causes that we would never really be able to know with certainty, but which we could approximate by creating concepts based on existing facts, and then updating those concepts as new facts come to light, the very antithesis of the empirical law producing, fact creating scientific method.At the Gates of the Citadel outlines the way we have to deal with the things we can never know with certainty, eliminating all of the laws and scientific \"facts\" in favor of a concept model designed to weed out the inconsistent in favor of that which explains the most, with the most consistency and the least effort, the goal of The Copernican Series.