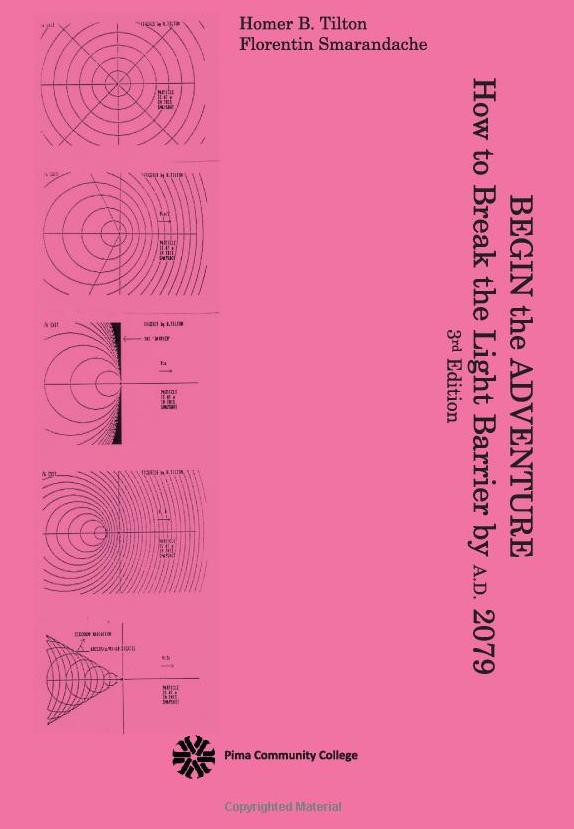 Homer B. Tilton
In 1905 Einstein found from relativity that there is an absolute light barrier. He reiterated his finden in 1916, writing, ...We conclude that in the theory of relativity the velocity c plays the part of limiting velocity, which can neither be reached nor exceeded by any real body. Poincar? and Lorentz did not share Einstein s view of relativity in that regard. Nor, later, did Fermi and Teller it seems. There were others who hesitated to come forward. Then in a 1921 lecture and a 1922 look, sidelights on Relativity, Einstein wrote (pp. 35- 6), Poincar? is right. The idea of the measuring-rod and the idea of the clock co-ordinated with it in the theory of relativity do not find their exact correspondence in the real world. Thus the light barrier was questioned by the same man who erected it, and the last theoretical obstacle to practical star travel was mortally wounded but few noticed. There is still a conditional light barrier, but no longer one that is impenetrable. It became clear that the second postulate of special relativity does not equate to an absolute light barrier as many continue to believe even to this day; some highly-regarded scientists continue to subscribe to this faulty logic: I believe that special relativity is correct and consequently exceeding the speed of light [by] (just accelerating more and more) is impossible, ...Don Lincoln, Fermilab, email dated 3 Feb. 2005. Such statements reflect a misunderstanding of the second postulate. The key is that the second postulate applies to photons but not to rocketships; rocketships are not macrophotons as Sachs pointed out. In the September 1971 issue of the journal Physics Today Mendel Sachs wrote about Einstein s 1921-22 change of mind as he referred to it, again in 1985, 1993 and at other times; but Sachs writings were scorned by other scientists. It was as if others wanted there to be a truly impenetrable light barrier perhaps because it seemed to hold open the exciting promise of time travel. The first author became aware of Sachs writings in 2004 and the two exchanged views for a time as reported here. This book presents a hard-science case for practical star travel. The first six chapters lay it all out in a logical and factual manner consistent with the theory of relativity. Chapters 7 & 8 outline a Grand Experiment designed to probe the light barrier. Chapters 7-9 give future-fiction accounts of possible scenarios of Humanity s first hesitant steps to the stars. Chapter 10 presents a separate argument questioning the idea of an absolute light barrier.