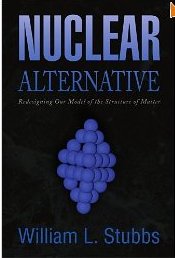 Bill Stubbs
The Standard Model has been the model of choice for nuclear structure since the late 1960s. However, 40 years later, scientists are still struggling to validate it. Nuclear Alternative offers an alternative explanation for the structure of matter that uses particles and forces observed and characterized since the 1930s. By redesigning the models of the proton, neutron, and electron, and developing a nuclear binding mechanism similar to covalent bonds in atoms, the book systematically develops models for more than 250 stable nuclei. It then uses the models to explain alpha and beta decay, and nuclear fission and fusion.