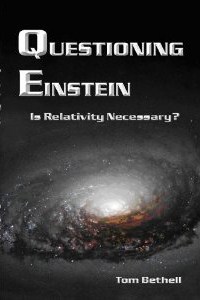 Tom Bethell
Questioning Einstein: Is Relativity Necessary? by Tom Bethell is a serious scholarly work that is very well written, absorbing the reader in a tale of long-neglected experimental results that plays out to a deep satisfaction in finally answering the question, \"Why can\'t I understand relativity?\" This is a fresh, unique review of both special and general relativity. It takes for granted that Einstein s mathematics is properly done. It does not quarrel with the numerous experimental results that support Einstein\'s general relativity theory.

Bethell\'s book is not mathematical; after all, he does not quarrel with Einstein s mathematics. Importantly, it is strongly based on experimental foundations. Time dilation, for example, is supported by but not proved by moving muons and clocks carried around the globe.

In particular, Bethell promotes Petr Beckmann s case that the medium of propagation of light is the dominant gravitational field. That idea is actually part and parcel of Einstein s general theory of relativity, save that the latter hides the simplicity behind tensors in curved space-time.