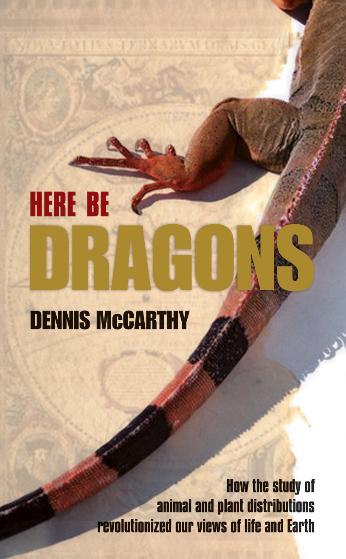 Here Be Dragons / How the study of animal and plant distributions revolutionized our views of life and Earth (Buy Now)
KeyWords: Expanding Earth

Dennis J. McCarthy
Why do we find polar bears only in the Arctic and penguins only in the Antarctic? Why are marsupials found only in Australia and South America? In answering these puzzles, Dennis McCarthy tells a story that encompasses two great, insightful theories that together explain the strange patterns of life across the world--evolution and plate tectonics. We find animals and plants where we do because, over time, the continents have moved, separating and uniting in a long, slow dance; because sea levels have risen, cutting off one bit of land from another; because new and barren volcanic islands have risen up from the sea; and because animals and plants vary greatly in their ability to travel, and separation causes the formation of new species. It is the story of how life has responded to, and has in turn altered, the ever-changing Earth. And it includes many fascinating tales--of pygmy mammoths and elephant birds and of radical ideas by bold young scientists first dismissed and later, with growing evidence, widely accepted.