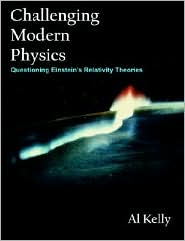 Newton's Laws held for 300 years until Einstein developed the 'special theory of relativity' in 1905. Experiments done since then show anomalies in that theory.

This book starts with a description of the special theory of relativity. It is shown that Einstein was not the first to derive the famous equation E = mc2, which has become synonymous with his name. Next, experimental evidence that cannot be explained by special relativity is given. In the light of this evidence, the two basic postulates of the special theory of relativity on the behaviour of light are shown to be untenable. A new theory (universal relativity) is developed, which conforms to the experimental evidence.

The movement of a conductor near a pole of a magnet and the movement of that pole near the conductor does not always give the same result. It has been claimed that this contradicts relativity theory. Experiments described in this book show that it is not special relativity but another basic law of physics that is contradicted - Faraday's Law.

The Big Bang theory of the beginning of the universe is questioned and an alternative proposed. The source of much of the mysterious missing 'dark matter' that has been sought for decades by astronomers is located. An explanation of the shapes of some galaxies is proffered.